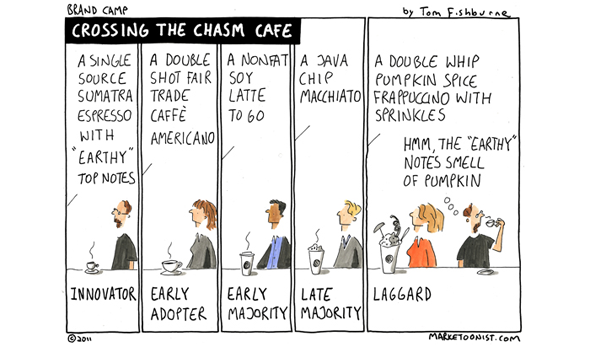 Getting a product out the door is no easy feat. Often, ideas and prototypes stall on their way out the door because of a simple tactical error – falling in love with the expression of the original insight.In Crossing the Chasm, Geoffrey A. Moore advocates using each customer segment to market to the next one, making adoption less risky and more socially acceptable. Similarly, the most difficult step in gaining internal traction for a disruptive innovation is making the transition between visionaries (early adopters) and pragmatists (early majority). After uncovering a new market opportunity, product teams need language to describe the new solution. Since the product is the first of its kind, they create their own words to describe it.

Like the secret password in a kid’s clubhouse, this new language bonds the original team. It also works against the team when they seek internal support for productization from executive, legal, financial and other members of the organization. They are literally speaking a different language.The simplest way to cross the chasm is to take a cue from the movie and venture industries and use an analogy. Craft an internal “pitch” that distills the team’s vision into a single, jargon-free sentence that creates a connection to something we already know and understand.

Venture example: YouTube = Flickr for videoAnalogies and mainstream language enables innovations to cross the internal chasm and get the traction needed to make it out the door. This makes it easy for internal fans, investors and partners to spread the word, adding social proof and making it safe for the crowd to follow.

So Good They Can't Ignore You: Why Skills Trump Passion in the Quest for Work You Love
by Cal Newport

Lean In: Women, Work, and the Will to Lead
by Sheryl Sandberg

Drive: The Surprising Truth About What Motivates Us
by Daniel H. Pink

Wired to Care: How Companies Prosper When They Create Widespread Empathy
by Dev Patnaik

Made to Stick: Why Some Ideas Survive and Others Die
by Chip Heath

Gamestorming: A Playbook for Innovators, Rulebreakers, and Changemakers
by Dave Gray

Switch: How to Change Things When Change Is Hard
by Chip Heath

Orbiting the Giant Hairball: A Corporate Fool's Guide to Surviving with Grace
by Gordon MacKenzie

Business Model You: A One-Page Method for Reinventing Your Career
by Timothy Clark